HOME > THE ROOMS > The Noble Residential Floor > The Rose Room

This room was originally decorated by Isidoro Bianchi and his collaborators; but since then a large part of their work has been heavily ‘re-touched’, including the stucco-work, and in places is completely damaged, like the circular panel in the centre of the ceiling: “A painting of figures representing Venus and Mars” still visible in the eighteenth century was substituted, in the midnineteenth century, by another with “a Fama bearing the Madama Reale coat-of-arms and painted by one of the disciples of Professor Gaetano Ferri”.

The painting of Venus and Mars – clearly modelled on Cristina and Amedeo – dominated the centre of the vaulted ceiling whose dome has been erected on a circular drum, encompassed in several sections by a series of putti on corbels. This drum is connected to the square room below by four angular groups of stucco putti as pedentives. The Savoy Rose coat-of-arms, reinforced as the symbol awarding to Vittorio Amedeo of the longed-for Royal title the king of Cyprus, in 1632, appears prolifically on all the frames which, in rigorous architectural succession make up the vault, both in those with lands, and with corbels and coffering.

It is difficult to determine what pro-portion of these roses dates back to the seventeenth century, and what dates back to the excessive glorification of Savoy in the nineteenth century. When one bears in mind, for example, the expanse of roses scrolls which now forms the first cornice in the vault, and was described by Leonardo Marini in the late eighteenth century as a “corbel with olive leaves”.

The motiv of stucco putti form a link between the drum and the fresco painted frieze at the top of the walls. The sixteen stucco putti on the arched ceiling divide this space by framing the panels adorned by garlands of flowers and fruit, and other winged putti were frescoed on the walls in pairs by Isidoro Bianchi under the lobed-cum-linear frames and on a gilded background. Each pair of putti is in mid-flight and playing with a motif of the Savoy coat-of-arms like the Cyprus Rose and the knightly insignia, the “Collare dell’Annunziata”.

The doors, originally carved by Casella, were totally re-done in the nineteenth century “from Domenico Ferri’s designs by the sculptor Isella as they were so badly reduced”. Busts of Emanuele Filiberto and Margherita of Valois on the south and north doors, and Maria Giovanna Battista on the west door were also sculpted by Isella.

The current tapestry which imitates a sample of mock damask not antique left in full view in a corner of the room. It stops one from imagining the original red and gold harmony of the room whose walls were enhanced by “a leather tapestry of red background and embossed golden flowers” which gave it a royal and stately appearance. There was even space for “four circular paintings, which represented the four elements” painted by Albani and currently in the Savoy Gallery, in Turin. This room was certainly of a state room, and not, as has been frequently written, the duchess’ bedroom, as the 1644 inventory explains that the bedrooms were on the floor below. Amongst these bedrooms there was one with silver-thread royal bedlinen and dark blue and gold-fringed satin cushions together with a gilded balustrade around the bed. This room was directly under the Fleur-de-lis room. 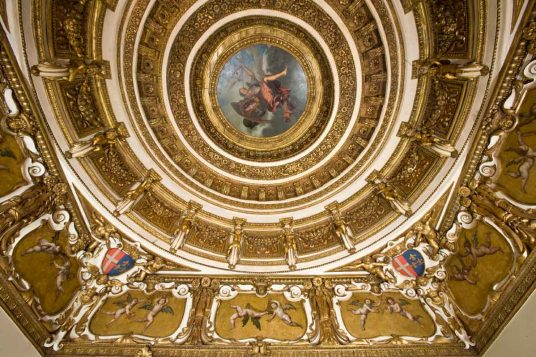 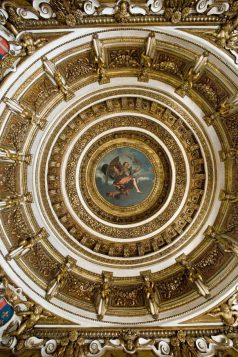 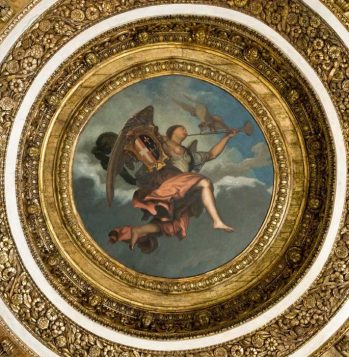 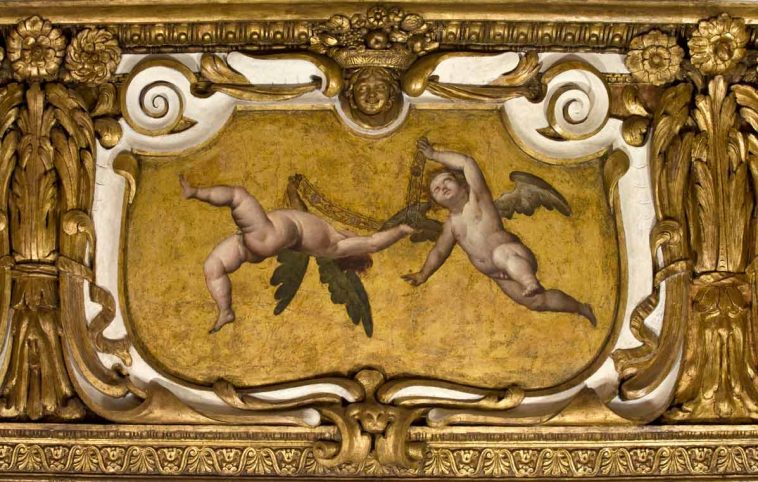 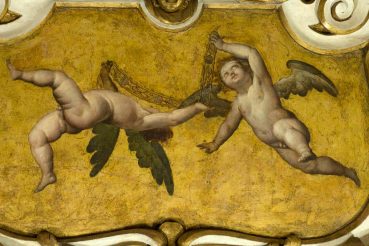 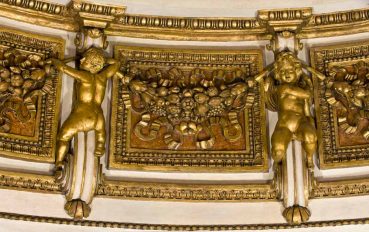 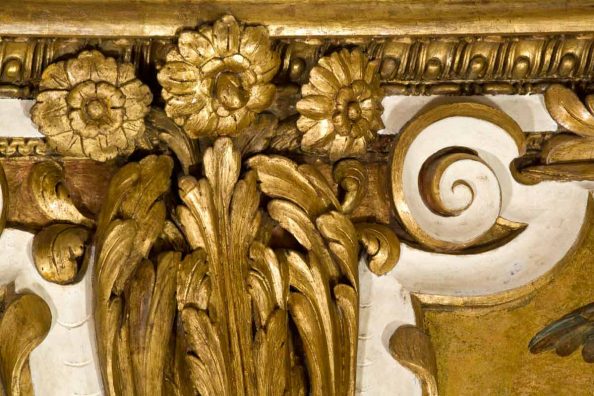 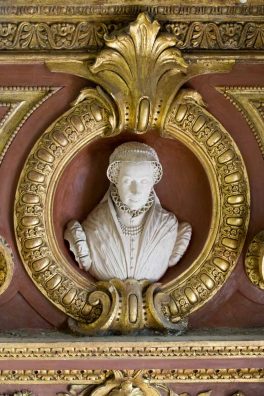 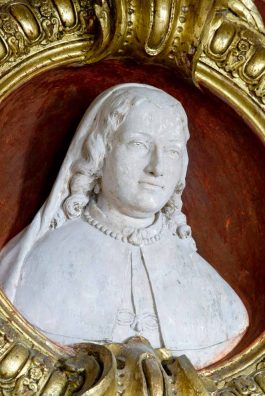 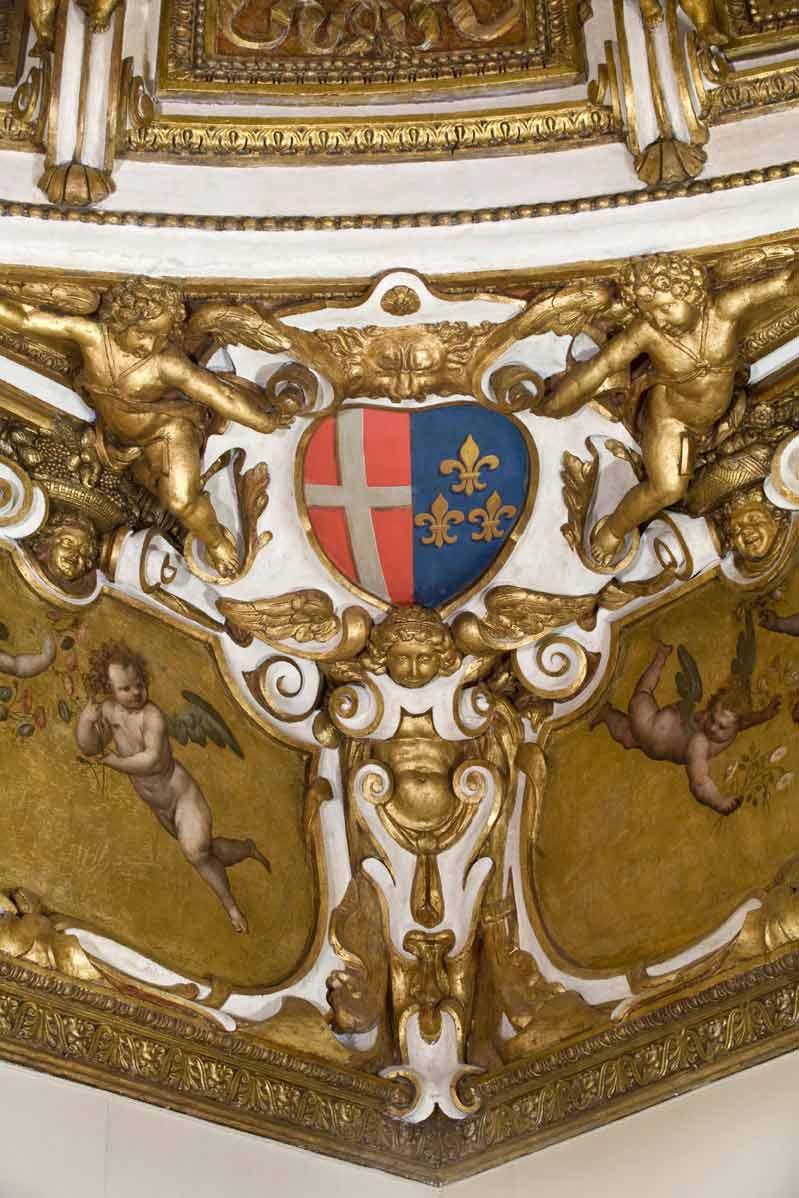