HOME > THE ROOMS > The Noble Residential Floor > The Planets Room

Once again Isidoro Bianchi and his collaborators were responsible for the decoration of this room. The design of the arched ceiling is both intricate and articulated, and so renders less influential the size of the central rectangular panel compared to the other lobed-cum-linear fresco panels as if to show the close iconographic relationship between them. Isidoro Bianchi’s skill and that of his team is consistently obvious in these fresco panels, as for example in the central one which depicts Old Father Time coronating the river Po, flanked by putti representing day and night. It is rich in references to the duration changes in the passing of time. There are iconographic quotations from Ovidio’s myth narrating the fall of Fetonte, that is the transformation of the Eliads into poplars; the swan and architectural ruins; the river Po depicted carrying an amphora from which water is flowing out, and carrying a garland of seasonal fruits such as: corn, plums, grapes and citron.

The stucco-work decoration wich frames the ceiling serves to connect the figure of Time to that of the origin of the universe, when the planets are created, and its annual and daily changes, once again using the narrative from the second book of Ovidio’s Metamorphosis. An plastic frame with garlands supported by four putti lead up to a supported by four putti fresco panel with symbols representing the Dawn, the Sun, the Rainbow and the Night, each one’s position in the room corresponding exactly with its respective cardinal points.
Following the curves of the arched ceiling, at the next cornice there are four winged putti introducing the heart-shaped panels in the four corners in which, symbolically, the four seasons are illustrated – the spring, equinox, the summer solstice, the autumn equinox and the winter solstice. Marini had already named the subjects to be used in the decoration of this room in his late eighteenth century report.

Marini probably used Cesare Ripa’s Iconologia to interpret the decorations, the same text may have been used by the painter Isidoro Bianchi himself. The more hidden meanings, with respects to Ovidio’s quotations, relative to the personal events in the lives of the sovreigns, could be understood, relative to the central panel, thanks to what Filippo d’Agliè has written about Eridano in his Delitie: “within sight to those near are a Swan, the tomb of the Fetontes, the sad sisters who had been turned into poplar trees and whose tears turned into Elettro as they fell. And, as if in a celestial image, the river, full of stars flowing through the sky. All this symbolises that there is Delitia in the release of pain”. The introduction of the theme on pain, absent in the first two rooms and part of the cosmological theme, could have been added after the death of Vittorio Amedeo I in 1637. The difference between this room and the previous rooms is very noticeable even in the architectural design of the arched ceiling.

One of Leonardo Marini’s drawings of a part of this room shows us the amount of nineteenth century restoration which transformed thin antropomorphic decorations in all the four corners in more plastics figurative groups. Probably part of this restoration included the twelve signs of the zodiac which frame the frescos. Like in the other rooms there was a decorative band between the walls and ceilings which Marini filled with putti inside octagonal panels and celestial beings inside oval panels. In each case they were smaker than in other rooms, as the 1644 inventory notes the tapestry as being six ‘rasi’ high against five and a half in the Fleur-de-lis Room and Rose Room. The transformation of this band into a decoration in keeping with the rest of this floor was carried out by Gaetano Ferri between 1857-58. He separated the band from the ceiling with a heavy cornice and remoulded the octagonal and oval panels in harmonious series and of equal dimensions. But the most important work he did was to add a dynasty significant to the freize by alternating the signs of the zodiac with portraits of the Savoy dukes and duchesses: Emanuele Filiberto and Margherita of Valois, Carlo Emanuele I and Caterina of Hapsburg, Vittorio Amedeo I and Cristina of Borbone, Carlo Emanuele II and Maria Giovanna Battista of Savoia Nemours.

During this period the stucco-work on the ceiling was re-moulded and painted. Originally this room was, according to Marini: ‘ornate with blue stucco-work, golden stars and white figures’ and the 1644 inventory describes a leather tapestry which hang in this room as “being coloured with gold and silver flowers on a blue background and made in Turin”. The overall effect was a celebration of blues, whites, silvers and golds which could also be seen as the dynastic colours of the Kings of France. If our interpretation of the decoration of the room towards the death of Vittorio Amedeo I is correct, it could also be known as the Regency Room. 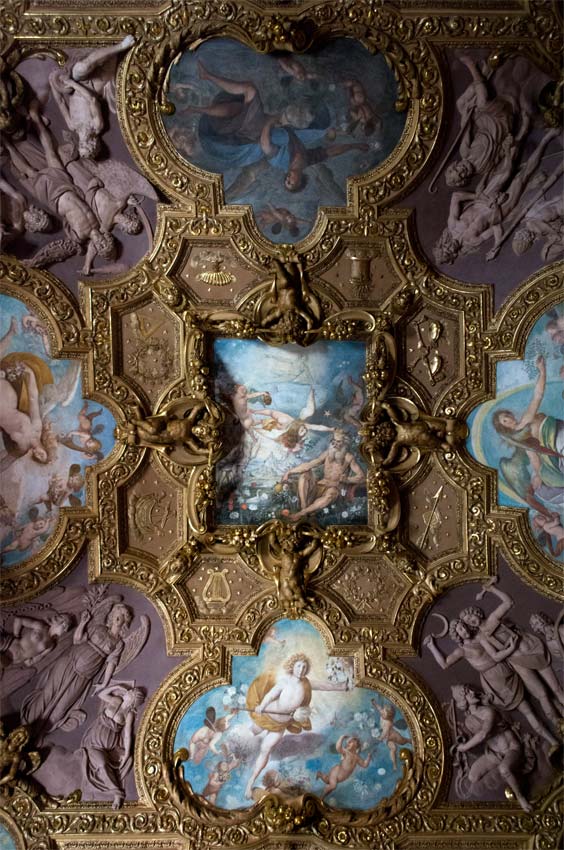 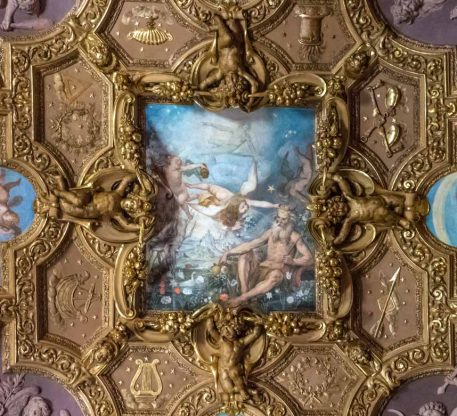 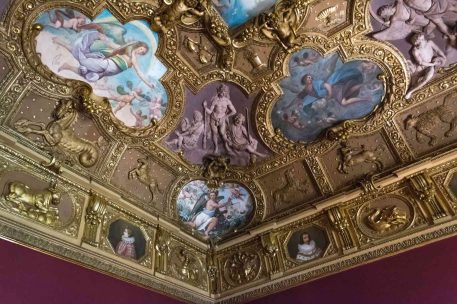 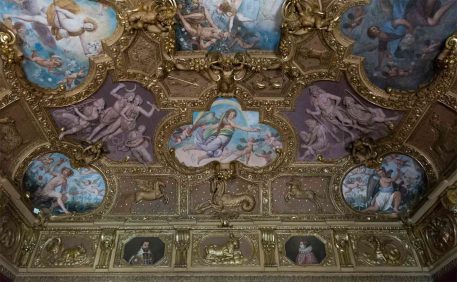 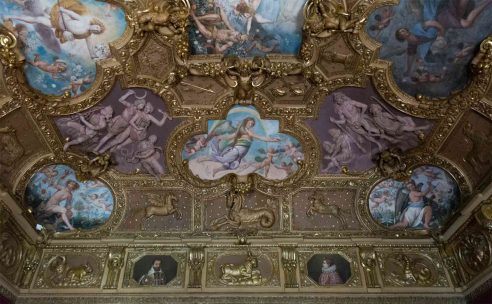 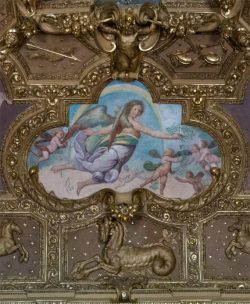 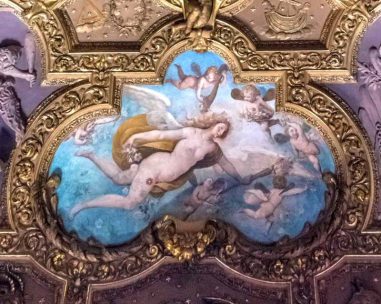 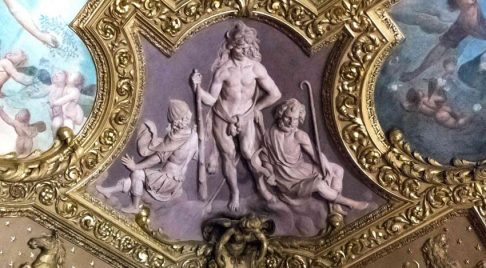 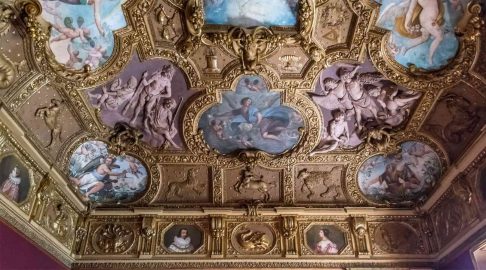 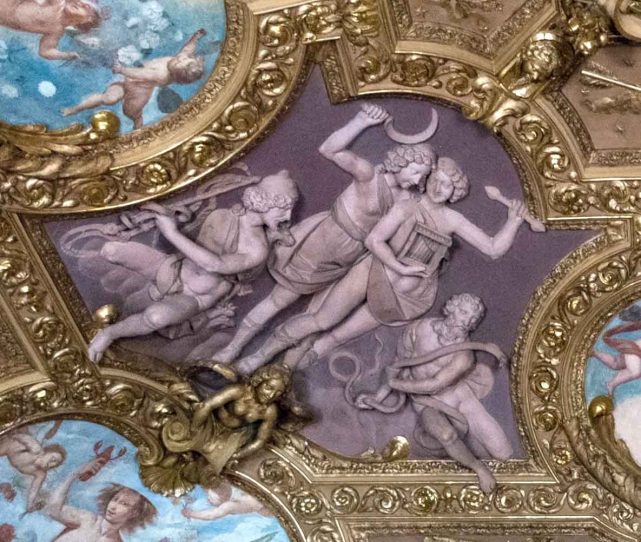 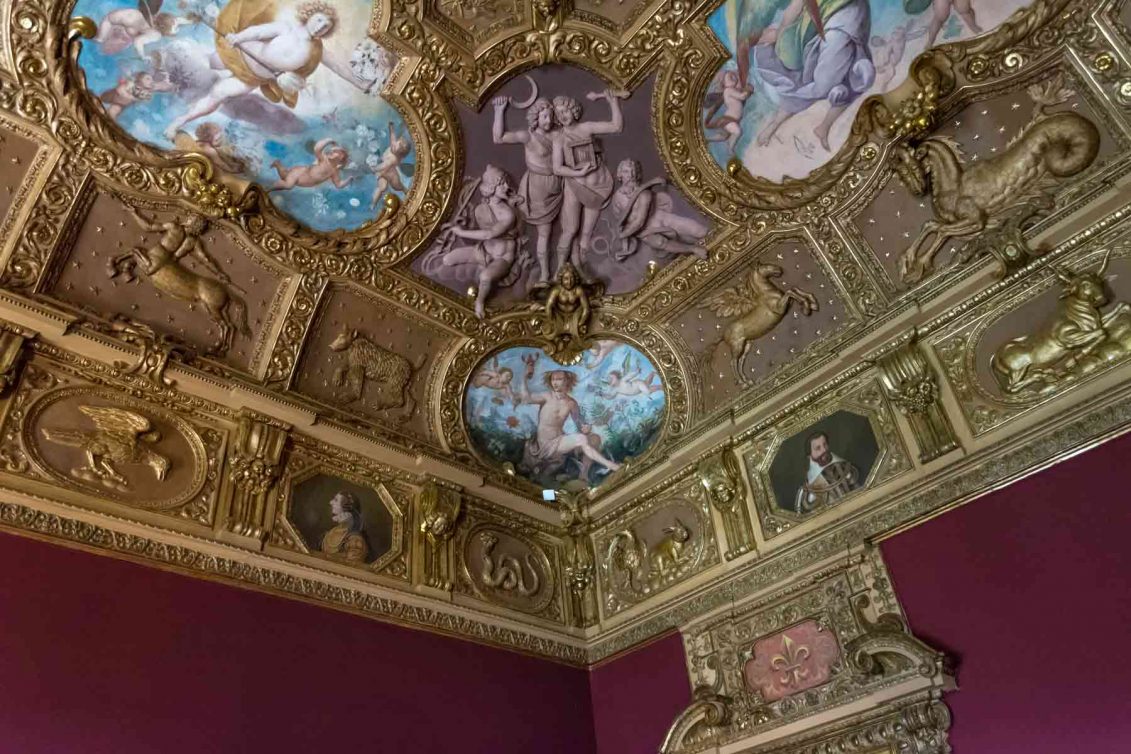