HOME > THE ROOMS > The Noble Residential Floor > The Great Salon

The great salon represents the heart of the seventeenth century restructured palace, reaching its current dimensions in volume and height. These dimensions were perfectly in keeping with the new monumental access to the west, through the open arcade and the great double staircase; apart from it being a room of honour it also had a privileged view of the Po and the facing hills.

The volume and height of the great salon called for an outstanding quality of decoration and this was brilliantly managed by Isidoro Bianchi. He created a type of never-ending scene on the walls, strengthened by the presence of enormous spiral columns which supported an elaborate balcony with imitation statues.

The great salon was decorated by Isidoro Bianchi and his sons Pompeo and Francesco in the early 1640s; successive work was also done (1677) by the Recchis and Giovanni Battista Cortella – probably in the architectural panelling which scan the historical scenes on the walls.

The general architectural framework was the object of vigorous restoration work done between 1924-26 necessary to conserve it and also to insert plaques and other memorabilia to commemorate those lost in the first world war. These additions were designed by Ludovico Pogliaghi and carried out by one of his disciple Gerolamo Poloni from Milan. The doors were also redone in these years. The general theme of the decor – the exaltation of the origins of the Savoy family by remembering the military feats of the early dukes — includes the rich dynastic history and problems in the times of Carlo Emanuele I, but also how the family adapted to the political climate in the 1640s, stressing the alliance and friendship shared by the Savoys and the Kings of France.
Count Emanuele Tesauro, the author of several publications on rhetoric and the Savoy royal family history, alongside d’Agliè, was probably responsible for choosing the subjects of the paintings and words on the plaques.

One of the original founders of the Savoy household, Aimone the Peaceful (1291-1343), is depicted on the left side of the scenery. He helped the King of France in 1340 against the English in the siege of Tournay. There is also a plaque which explains the event: “NON MINUS HOSTIBUS QUAM SUIS / BONUS AIMON DUPLICI VICTORIA INNOCENS VICTOR / TORNACUM EXPUGNAVIT / ET SERVAVIT”.

The Battle of Cressy in 1347 is the subject of the painting on the left. It shows it Conte Verde (the Green Count) Amedeo VI who was an ally of Filippo VI di Valois against the English: “NONDUM AMEDEUS VIRIDIS / ADOLESCENTIA MATURUS TRIUMPHAVIT / RESTITUTA FRANCORUM PUGNA EREPTA ANGLIS / VICTORIA ANTE CEPIT HOSTES VINCERE / QUAM POSSET PER AETATEM REGNARE”.

It is difficult to interpret the pain-tings on the wall facing the river Po, partly because they are damaged — especially the central one — and partly because of the lack of the precise description contained in the accompanying plaques. The presence, however, of the Savoy and French colours and members of the respective Royal families, recognisable due to the Fleur-de-lis and Savoy cross, confirm their part in the celebration of the political and military alliances between the two kingdoms in the past centuries.

The central painting on the northern walls is of Amedeo V, who perished in the Battle of Mons en Peulle, between the King of France Filippo IV and Count Roberto of Fiandra — at least that is what the somewhat worn plaque would have us believe: “AUCTORE BELLI LUDOVICO SANCTI REGIS PRONEPOTE AMEDEO V AUXILIATORE BONA PRO CAUSA / SANCTITAS ET BENEFTCENTIA IMPULERUNT / … UT IN MARGARITA FLANDRIAE / REGNANTEM INNOCENTIAM / MCCCIV”.

In the side paintings we find the Green Count Amedeo VI on the right who is entering Costantinople after having participated in the expedition in 1365, and supported by the King of France Giovanni II (the plaque is badly damaged here too). On the left the young Carlo II of Savoia — son of Carlo I and Bianca of Monferrato — welcoming Carlo VIII who is preparing his descent of Naples, and giving him the horse which saved his life in the Battle of Fornovo. The plaque says: “DOCTUS A NATURA AD GALLICA AUXILIA / SEXENNIS CAROLUS IOANNES AMEDEUS / UBI CAROLUM OCTAVUM LIBERALI ORATIO / NE ELOQUENS INFANS EXCEPIT / LIBERALIORI MANU QUIA FERRE POTERAT / AURO ARMATA VICTORIA”. The Castello di Torino (Palazzo (Madama) is easily recognisable in the background. The scenes in the oval pictures which accompany the fresco in the centre of the ceiling, are of mythology and frequently make some reference to Ovidio’s Metamorphosis. As Giovanni Vico had already pointed out, Venus for example, is healing Aeneas who has been wounded by Turno in a duel; the Banquet and the rat of Ippodamia; the Fight of the Centaurs; Bacco’s return from the Indies and the giants who Jove struck by lightning climbing Mount Olympus. 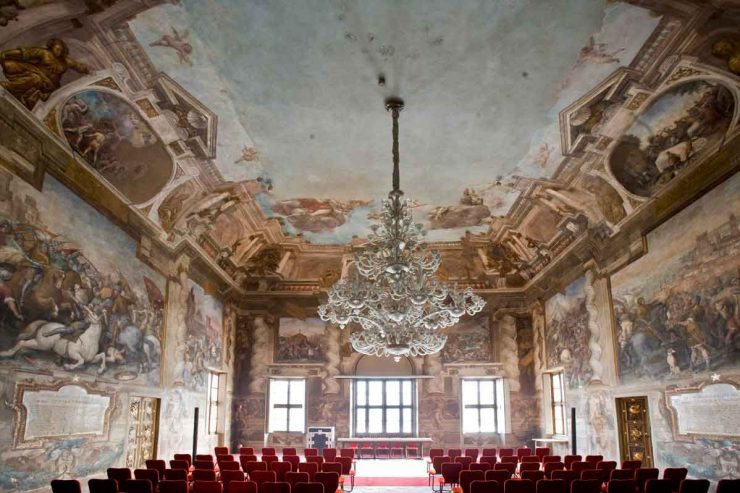 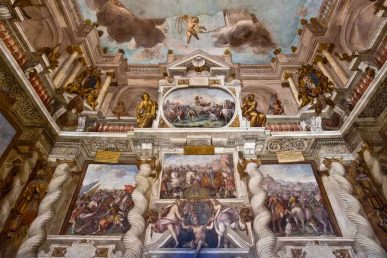 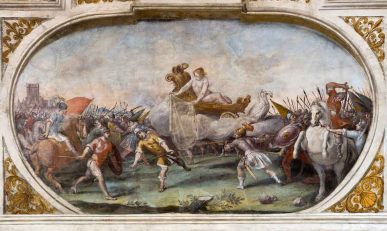 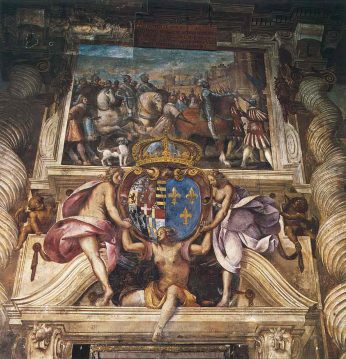 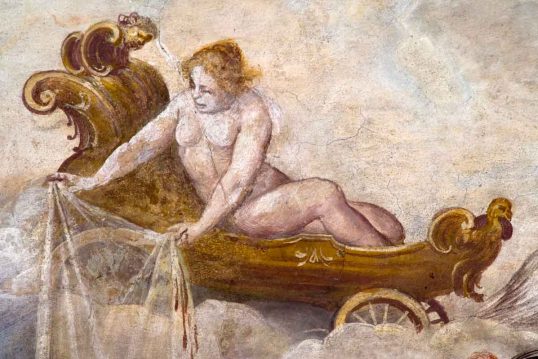 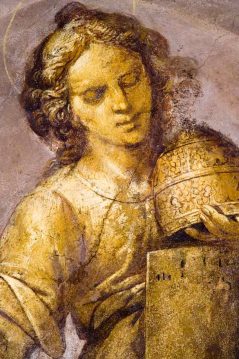 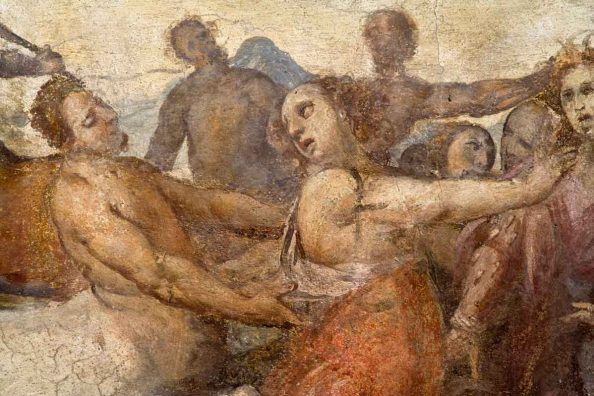 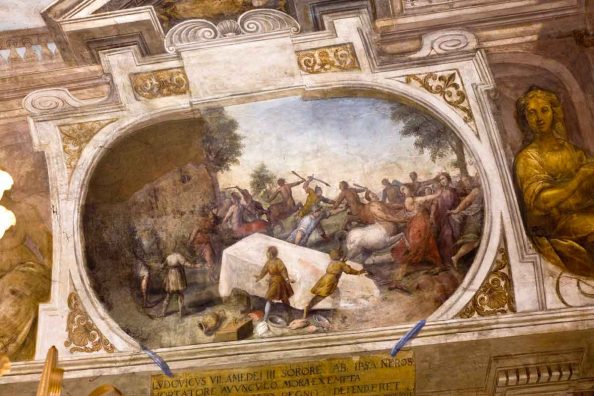 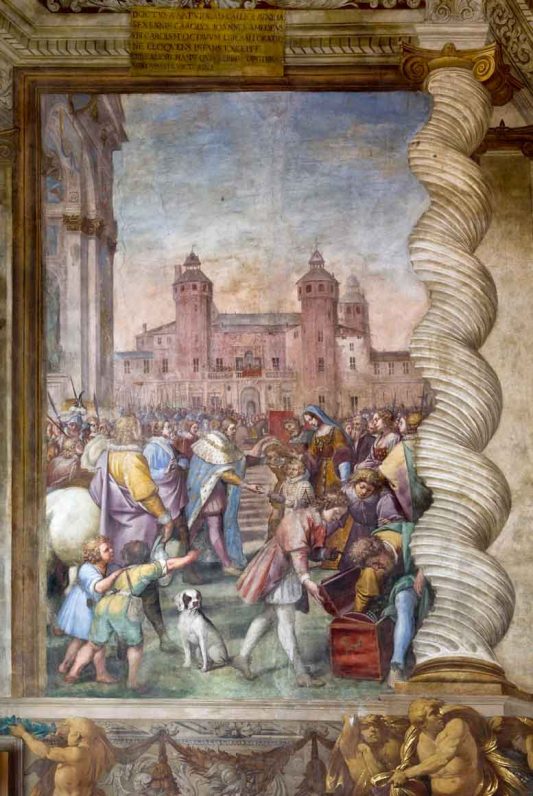 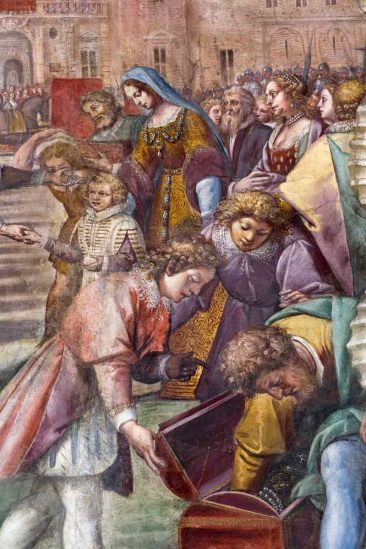 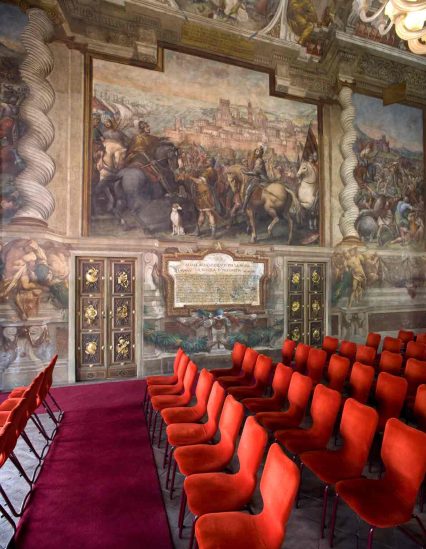 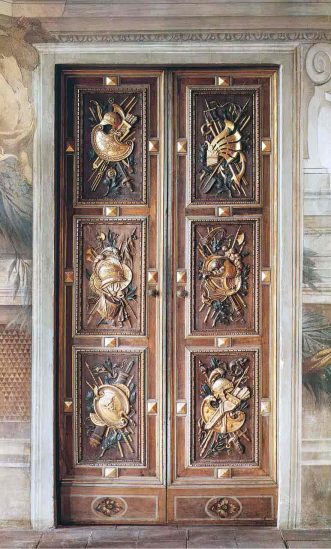